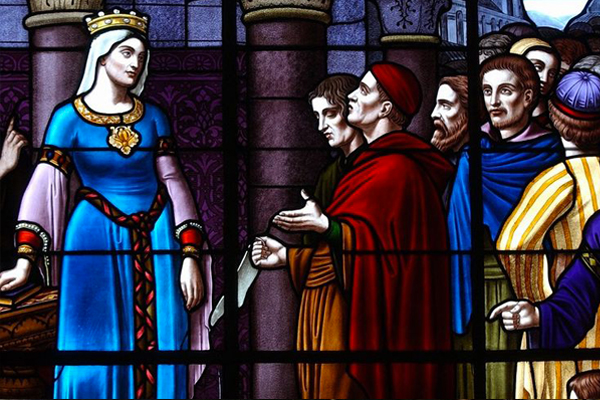 Some of us will remember Eleanor of Aquitaine from our history lessons or movies from the past. She was the daughter of the Duke of Aquitaine, who was the ruler of of southwestern France. Unlike many of the noblewomen at the time, and as the rightful heiress of the Duchy of Aquitaine, her father William X, ensured that she had an education to match that of any nobleman.  Eleanor learned arithmetic, astronomy, history and could ride and hunt.  She also learned household management skills, embroidery and could play backgammon, chess and could play complex musical instruments such as the harp. Eleonor was described as “more than beautiful and the embodiment of charm” yet we do not know mundane details such as the color of her eyes.

William X dies on his way to Santiago de Compostela after drinking water from a stream against the advice of his followers.  On his death bed it is said that he had sent a message with one of his loyal subjects delivered by hand to the Duke’s ally, and overlord, Louis VI, King of France.  This message was to secure Aquitaine by demanding that the dauphin, Louis Le Jeune “the young Louis”, marry Elenore, or someone would usurp the duchy, and all would be lost.  Louis VI, he too very sick at the time, knew that this was a very important financial and strategic opportunity for the Franks and sent his son to Bordeaux.  No Frankish king had ever journeyed that far south to claim a bride.  That is how important that matter was to the king of France

As Duchess of Aquitaine, Elenore inherited a quarter of modern day France and on the 25th of July 1137 the young couple are married in the Cathedral of Saint André (Andrew) in Bordeaux.